However, the actual definition of intersectionality is simpler and much more meaningful: discrimination might not appear when you look at individual factors, like race, gender, or income: discrimination (or differences in outcomes) might only appear when multiple factors are taken into account.

In this blog post I’m going to argue that anyone who disagrees with the intersectionality as a tool for analyzing discrimination is ignorant of basic marginal statistics. I’ll start off by introducing a made-up dataset and tools to analyze it. It will become apparent that the most useful tools for understanding this kind of data are “intersectional.”

Let’s pretend that the total population of all people in the USA is about 80% white and 20% black, with about half of each of those groups being male and the other half female. Now let’s take a representative sample of 100 doctors out of all the doctors in the USA. We would expect, a-priori, that a random sample of doctors, who are themselves a random sample of the American population, should be representative: 20% black, 80% white, half male/female: in other words: 10% black women, 10% black men, 40% white women, and 40% white men. Now let’s look at our representative sample of doctors: 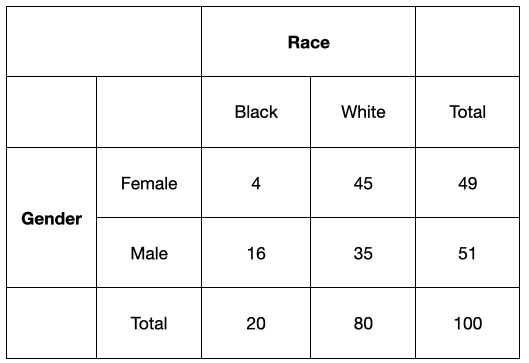 Analyzing discrimination using broad categories like gender, ethnicity, religion, and income can be useful. However, problems emerge when too many factors are considered. For instance, I guarantee that you can find one group - maybe elderly Tasmanian chimney sweeps - that will be over- or under-represented in a given sample.

While this seems like it might present huge issues to understanding discrimination (at how many factors do we draw the line?), it actually doesn’t: identifying unequal outcomes (not enough black female doctors), isn’t where the analysis ends, it’s where it starts. Once you identify an unequal outcome, then you can start uncovering the reasons that might cause it. Sometimes the reason is systematic racism, sometimes it’s something trivial (very few Spanish-speakers showed up because the signs were only printed in English), and sometimes it’s simply random variation.

Intersectionality is not controversial if you’re used to analyzing data and interpreting data. The only people who want to exclude intersectionality from our analysis toolkit are those who have an ideological reason for doing so.